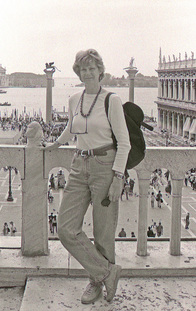 ​Trained as an artist and art historian in New York City, Robinson attended the High School of Music & Art, Hunter College (BA) and New York University for graduate study in 19th Century art (recipient of a travel grant to study the work of Edvard Munch in Oslo). She has considered herself a fine art photographer since 1982 when several images from her “Bathhouse on Block Island” Series were included in a juried exhibition of hand-painted photographs at Milwaukee’s, Lincoln Center for the Arts.Since moving to Belfast, Maine in 1986, Robinson’s photographs have appeared in several regional and national publications including Yankee Magazine, DownEast Magazine and Popular Photography and internationally in the Swedish, Fotografisk, and have been shown in numerous galleries, museums and juried exhibitions throughout Maine, New England and nationally. Public Collections in Maine include: Colby College Museum of Art, Waterville; the Farnsworth Museum of Art, Rockland; and the Portland Museum of Art (also included in the 1998 & 2011 “Biennial” Exhibitions). Robinson’s“Massacre of the Innocent,” from her “Urban Sidewalk Series” was included in New York City’s Museum of Modern Art’s Spring 2002 exhibit, “Life of the City” and in 2004 was acquired by the New York Public Library.

ARTIST STATEMENT : PHOTOGRAPHING IN MAINE
When my husband and I moved to Maine in 1986 I was hoping to find a less hectic and more creative life than the ones we left in NYC– one that might better support my dreams of becoming a fine art photographer.
At the time, I assumed it would be the unique, natural beauty of my newly adopted home state that would inspire me. However, at first it was the mostly 19th century, residential districts of my newly adopted hometown of Belfast that drew me in.– and since my medium of choice at that time was itself considered historic— that of applying oil pigments to toned silver prints to add color– the technique seemed ideally suited to my subject.
However, all that was soon to change. Inspired by a chance meeting with the legendary photographer Berenice Abbott at a gallery opening in 1988, I started to focus on Belfast’s changing waterfront and evolving industrial landscapes. Intrigued by the formal elements and relationships to the cultural communities I found there I continued to apply oil paints directly onto these silver prints allowing me to once again re-enter the scene and emotionally color my subjects.
More recently, in 2004 while still documenting what little was left of Belfast’s marginal landscapes and industrial buildings, I made my first digital photographs and soon began looking further a field for both the architectural remnants of Maine’s industrial and commercial past as well as focusing on Maine’s unique places and characteristics.

PROCESS . CONTENT . INSPIRATION
​Although most of my current photographic images– are digitally created from start to their finish as dye-infused metal prints– they still owe much to the essentially 19th century technique of hand-painting photographs that characterizes much of my earlier work. Today, with the virtually unlimited digital tools now available, it has become just as possible for me to emotionally “color” my subjects as I once did when applying oil pigments directly to my earlier toned, black and white, silver prints.